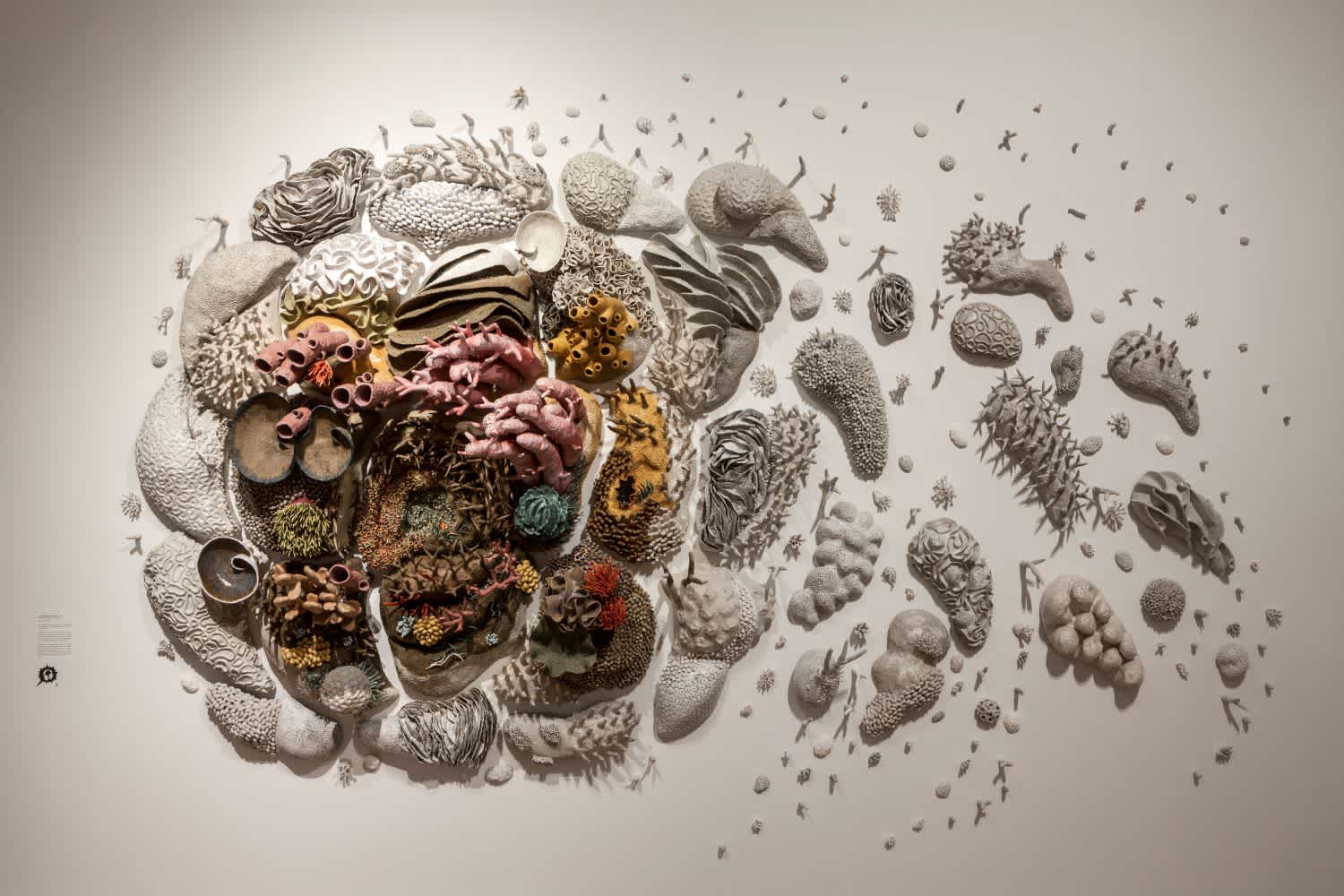 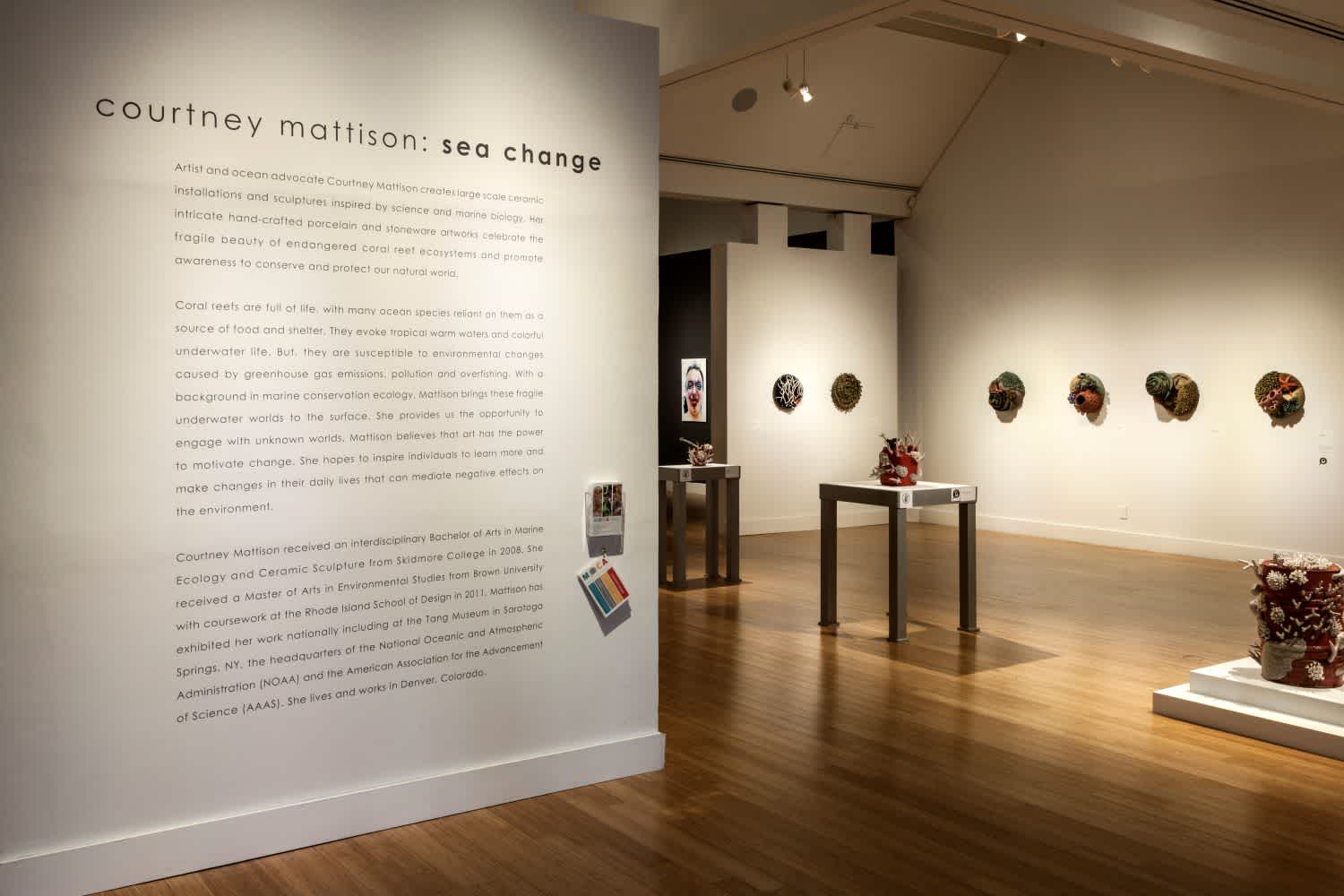 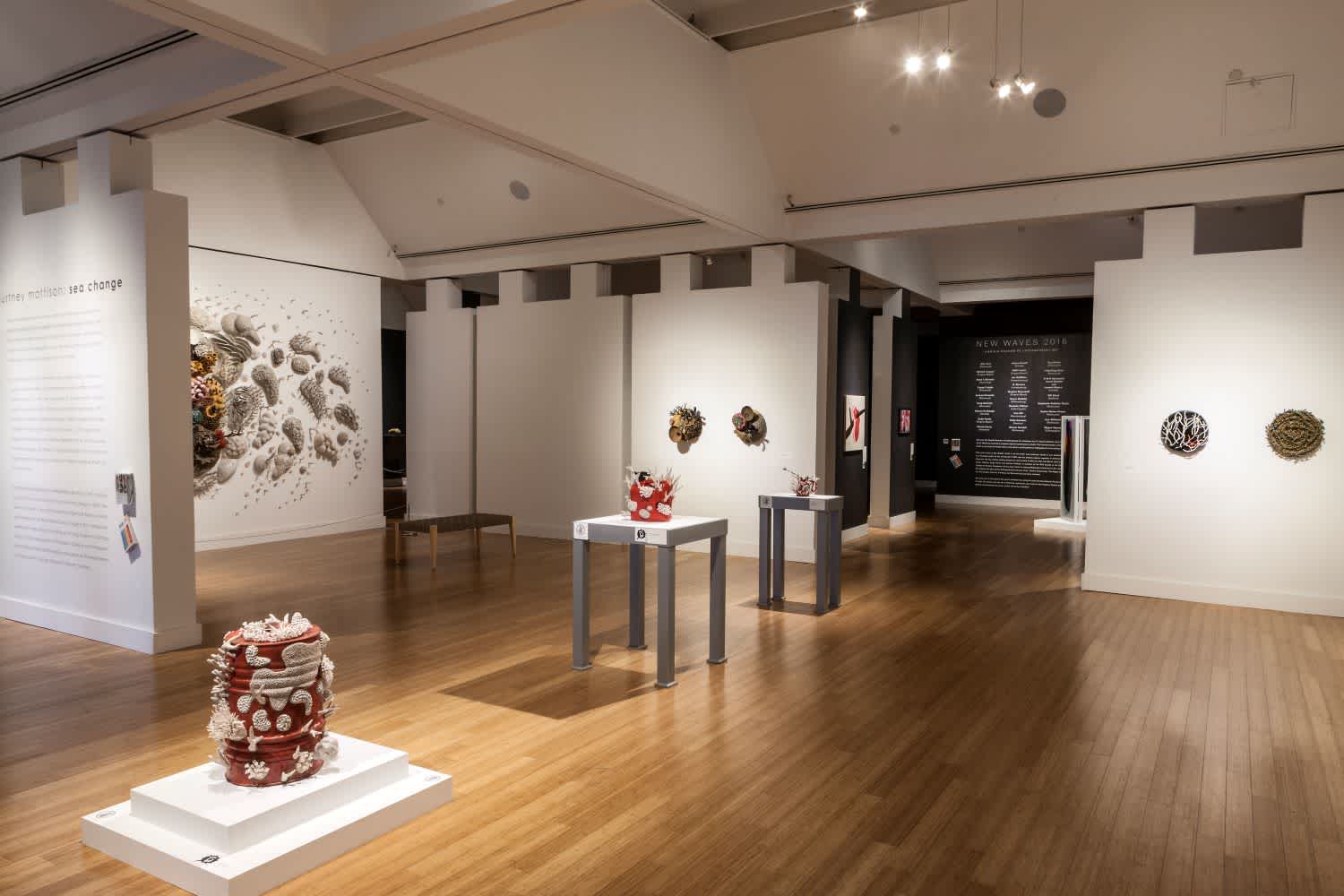 Coral reefs are full of life, with many ocean species reliant on them as a source of food and shelter. They evoke tropical warm waters and colorful underwater life. But, they are susceptible to environmental changes caused by greenhouse gas emissions, pollution and overfishing. With a background in marine conservation ecology, Mattison brings these fragile underwater worlds to the surface. She provides us the opportunity to engage with unknown worlds. Mattison believes that art has the power to motivate change in the way scientific data never could. She hopes to inspire individuals to learn more and make changes in their daily lives that can mediate negative effects on the environment.

Mattison references her firsthand knowledge of reefs to craft ceramic artworks that incorporate the colors, textures and subtle forms of coral reef ecosystems. She pinches together long coils of clay to make hollow forms and uses a variety of tools and glazes to add unique textures, colors and surface finishes.

In the first gallery, Aqueduct is a visual feast of colorful anemones, sponges, corals and other tropical marine invertebrates invading the gallery through a porcelain air vent. They spill down the wall occupying the gallery floor. This new installation explores sea level rise and its effects on human and ocean life in the future. According to the World Resources Institute sea level rise in Hampton Roads is increasing at twice the global average and at the highest rate on the U.S. East Coast. In Norfolk alone, the sea level has risen over 14 inches since 1930, a trend that isn’t slowing down anytime soon. Simultaneously playful and menacing, this installation envisions interior spaces being overrun by the ocean and its creatures.

Moving into the second gallery, Mattison’s expansive installation Our Changing Seas III invites us to explore an exquisite and yet disturbing representation of a coral reef. Brightly colored ceramic corals swirl in the center of the work; they appear alive, healthy and full of movement. However, they are slowly being invaded by coral bleaching, represented by the white encroaching surrounding forms. Environmental changes such as rising water temperatures cause coral bleaching. The corals lose the symbiotic algae that produce the food colonies needed to survive and flourish. Their vibrant colors fade to reveal the white skeletons inside. This powerful representation is the artist’s call to action.

Also on view in this section of the gallery are Mattison’s Hope Spots. They are a series of hand-sculpted sculptures portraying areas of the ocean identified as deserving special protection. Each sculpture represents an area of the ocean in its most ideal and healthy form and is named after the location. Find out more about Hope Spots and other ways you can get involved in water conservation, learn more about sea level rise in Hampton Roads and how you can get involved to protect our environment in Virginia MOCA’s ARTlab.

Born and raised in San Francisco, Courtney Mattison received an interdisciplinary Bachelor of Arts in Marine Ecology and Ceramic Sculpture from Skidmore College in 2008. She received a Master of Arts in Environmental Studies from Brown University with coursework at the Rhode Island School of Design in 2011. Mattison has exhibited her work nationally including at the Tang Museum in Saratoga Springs, NY, the headquarters of the National Oceanic and Atmospheric Administration (NOAA) and the American Association for the Advancement of Science (AAAS). She lives and works in Denver, Colorado.